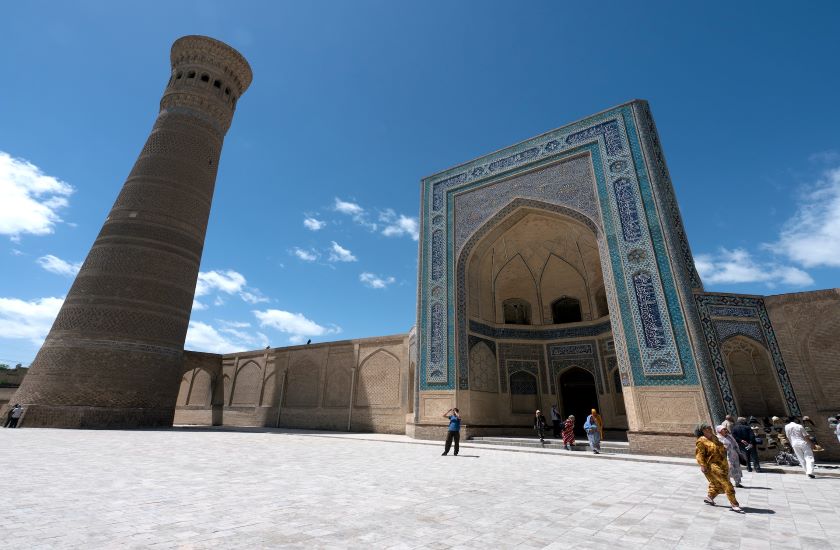 Most people did not have to live in royal palaces. But I would very much like to. The famous palaces of the eastern rulers seemed to be illustrations for the fairy tales of Scheherazade: crowds of devoted servants, treacherous viziers, and eunuchs guarding beautiful concubines in harems, labyrinths of luxuriously decorated rooms and treasuries with piles of jewelry. The colorful life of their inhabitants seemed to mere mortals. It’s good that now you can see the famous palaces with your own eyes, in which shahs, sultans, emirs, and caliphs “decayed and lived”.

The Ark, one of the oldest decorations of ancient Bukhara, is more of a fortress than a palace. The residence of the Bukhara emirs was built about one and a half thousand years ago. Ancient historians wrote that the architects based the construction plan on Ursa Major’s constellation. Whether this is true or not is difficult to say now, because the Ark was destroyed several times: in 1220, it was stormed by the troops of Genghis Khan, and 700 years later, by the Red Army under the command of Frunze.

The last assault put an end to the independent Bukhara Emirate. Now the surviving part of the premises of the Ark has been turned into a museum, and once it was a very densely populated place – a kind of government hostel. In addition to the emir himself, his relatives and the harem, the viziers with their households huddled in it, various freeloaders hung out (for example, the poet Omar Khayyam and the doctor Avicenna), and a prison was also located here. But the gates for everyone, including criminals, were the same – they still impress tourists with their majestic views.

Sultan Mehmud II, who had hardly conquered Constantinople, began to look for a place in the city to construct decent spacious housing. And he chose one of the hills above the Bosphorus, on which Topkapi Sarayi (“the palace at the cannon gates”) soon appeared. The morals of the eastern rulers were cruel, so in Topkapi, there are many premises with a bloodthirsty reputation. In the courtyard where tourist buses now stand, there was once a pillar with the severed heads of noble criminals.

Further, it is even more terrible: the torture chamber was located here, the executioner was washing his ax in the fountain, and the bodies of unfaithful concubines sewn into bags were thrown out of this window at night. However, there are also relatively peaceful sights, for example, the third-largest collection in the world of porcelain exhibited in the former Sultan’s kitchen. Once upon a time, foreigners who arrived here could not go further than the reception room of the ruler. Today’s tourists have opportunities: they are allowed into the inner chambers, the rooms of the harem, and even the luxurious bedroom of the Sultan.

Fifteen kilometers south of Jerusalem is the residence of the ancient Jewish king, whose name has been a household name for 2000 years and usually serves to designate torturers. However, Herod the Great is known not only for beating babies in Bethlehem and other atrocities – he was a very clever ruler and a fan of large-scale construction projects.

Among his notable projects is the palace complex of Herodium, which staggers the imagination even in its current dilapidated state. At the foot of a vast artificial hill is the Lower Herodium — palaces of royal relatives and buildings for servants, once surrounded by a luxurious garden.

There was also a swimming pool, fountain, sunbeds, and sunshades. On several floors of the Upper Herodium, there were chapels, gymnasiums, Roman baths, and an indoor bath. There was also plumbing. And since the suspicious king has become increasingly eager to “hide underground” over the years, a whole labyrinth of galleries is hidden inside the hill. As a result, the palace became a crypt for its creator: Herod the Great died and was buried here. Archaeologists discovered his tomb, or rather its fragments – in 2007.

The name Qasr Amra is translated from Arabic as “palace of the bath.” He served in water procedures during his time in the VIII century when the Umayyad dynasty ruled. From the side, the government bath does not look very picturesque. They assure that gardens used to surround it – probably, it was back then when hares and fallow deer were found in the local sands, according to local frescoes.

Speaking of frescoes, they made Qasr Amr the most famous of the Caliph’s desert palaces and secured a place on the UNESCO World Heritage List. What is there on the walls of the palace halls: portraits of rulers, hunting, military and everyday sketches, even old comics – a series of pictures with a continuation. And with the Iranian palace arch of Kars Amr, images of naked young ladies are related, which, unlike their Iranian sisters, have not been damaged in 12 centuries. Well, except for the time.

Isfahan is only the third largest city in Iran, but it is the most important in the number of ancient architectural monuments. The central Imam Square has a second name – Nesf-e-Jehan – “Half of the World.” If you get to this half of the world, you will see the famous Ali Kapu Palace, which translates as “Gate of Ali.” Initially (in the 17th century), a grandiose arch was built here, leading to the gardens and other palaces of the Persian shahs.

But they liked the arc so much that they gradually completed it themselves to the castle. Ali Kapu has a throne room, a hall for listening to music, and a veranda from which the Shah’s family watched the competitions in the square. And all the rooms are decorated with beautiful frescoes. Previously, they were even more remarkable – many depicted frivolous scenes.

But in the 20th century, Iran became an Islamic republic, and not all wall paintings survived this regime change. By the way, Ali Kapu is a palace with surprises. It looks like a two-story building from the front, but this is a trick to confuse enemies. There are six floors. And there is also a funny security room in Ali’s Gate — words spoken in a whisper in one corner of it are perfectly audible in another, but they are entirely impossible to make out if you stand in the center. Such is the acoustic focus that pleases tourists.

Shirvanshahs is shahs who ruled in the Shirvan region on the coast of the Caspian Sea, which is now part of Azerbaijan. When in the 15th century, the Shirvanshakhs decided to move the capital of their lands from Shamakhi to Baku, a palace had to be urgently built in the new administrative center. It turned out beautifully: the ensemble on three-tiered terraces, crowned with the mosque’s dome and towers of minarets, looks impressive even against the background of the modern architecture surrounding it today. Inside is a traditional set: a palace, divankhaneh (a building for meetings of the state council), as well, and baths, in which the shahs splashed in their free time from state affairs.

By the way, a water supply was installed in the baths, so the rulers of Shirvan lived comfortably. Although, by the standards of their Turkish and Bukhara neighbors, they huddled in terrible crowding. After all, the palace has only two floors: on the first – 27 rooms for servants, and the second – 25 rooms for the owners! At the same time, a place was found within the walls of the complex for the family tomb of the shahs themselves and the mausoleum of the court scholar Seyyid Yahya Bakuvi.

The residence of the last Egyptian king, Farouk, who was sent into exile after the revolution, the famous El Montaza Palace in Alexandria, is a very young landmark. It was built only in 1926. But the architects tried to decorate the building inside and out with royal luxury, worthy of the ancient eastern rulers. There are two palaces: a large one and a small one. Alas, the largest and most beautiful building can only be admired from the outside: it now serves as the guest residence of President Mubarak.

True, the presidential guard allows you to view and photograph the building up close. And you can live in a small palace – it has been turned into a hotel. The El-Montaza complex is surrounded by a spacious park, where it is pleasant to take a walk and admire the date palms, Lebanese cedars, fountains, and flower beds. Here you can even swim in the Mediterranean Sea – there is also a beach in front of the palaces.