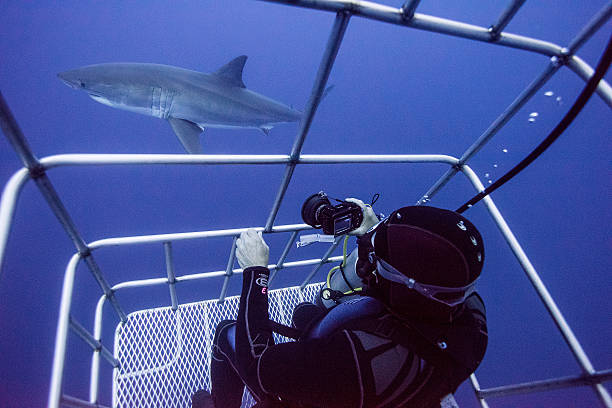 The tourist has gone picky – the usual boat trips, riding a scooter, and a “banana” will no longer surprise him. But underwater life is a completely different matter. The sea depths have become a popular tourist attraction today. Demand creates supply, so the world’s leading resorts spare no effort or money, introducing more and more new ways of dragging guests to the bottom into everyday beach life. We present the 7 interesting underwater attractions from different countries to your attention.

The small fishing village of Gansbaai, which is two and a half hours drive from Cape Town, enjoys enviable popularity among tourists. From here, excursions to the Dyer Islands most often begin, or rather, to the narrow strait called “Shark Alley.” He received such a terrible nickname, not by chance. Great white sharks live here. The best period for observing formidable predators is from May to August. It is the time when you are most likely to see them.

The spring and autumn months are also considered a good season, but sharks hunt in a larger area in winter, so it becomes more difficult to meet them. Tourists are taken by boat to the shark habitat, and then a specially designed cage with a couple of thrill-seekers and a huge piece of raw fish is lowered under the water. Soon, sea giants, sometimes reaching seven meters in length, begin to curl around, and naturalists get a chance to watch how predators devour the bait with appetite at a distance of a meter from them. They also take people to Shark Alley from the Cape of Good Hope – from the port of Simonstown.

Many countries offer to look at the beauties of the sea by scuba diving, and eilat’s underwater observatory is one of them. It is a public aquarium with more than 800 species. For more than 30 years, the white tower of the building has risen directly from the water 100 meters from the shore. The lower observation deck, surrounded by coral reefs, is located at a depth of six meters. Walking along the window walls here and enjoying the beauty and quirkiness of marine life, it is easy to lose track of time.

At the middle level, there is a restaurant overlooking the sea, and at the very top, there is an observation deck from where an unforgettable view of the bay, mountain peaks, and the city opens. The marine park also has separate pools for sharks, rays, and turtles. It is visible through translucent walls and from above. The observatory is open daily from 8:30.

Japan has one of the world’s most fascinating and unusual underwater attractions. In the city of Toba, where the world-famous jeweler Mikimoto was born more than 150 years ago. At 33, he visited a jewelry store, discovering how much natural pearls cost. The extraction of pearls then was very laborious (scuba gear did not yet exist), and therefore they were prohibitively expensive. Mikimoto, impressed by the number on the price tag, began experiments on growing pearls, which, however, failed for a long time.

However, he did not give up and eventually won, revolutionizing the market: until then, rare jewelry became available. The history of pearl mining and the technology of its cultivation is introduced during an excursion to Mikimoto Pearl Island, one of the most exciting parts of which is the show of Ama divers. The ancient Japanese trusted women to retrieve pearls from the sea floor since they were thought to dive more efficiently than men.

Holding their breath, they plunged to a depth of 50 meters. Ama labor is no longer used today, and pearls are grown on particular plantations. On the island, you can try to increase your pearl by placing a grain of sand in a shell. Farm employees sign the mollusks, promising they will give the pearl to the owner if the experiment succeeds. Entrance to the island costs 1,500 yen.

Inspection of sunken ships is a beautiful event. Stories of shipwrecks excite the imagination, regardless of the date of the disaster. However, only quite experienced divers could afford this leisure. the ferry Zenobia, which has suffered a tragedy off the coast of Cyprus, can be accessed by anyone. Tourists are delivered to the dive site by boat from the port of Larnaca. In general, a tourist submarine is not what we are used to seeing in films about the war, but rather a comfortable vessel: soft chairs by the windows and air conditioning.

You sit as if in a movie theatre, but they don’t sell popcorn. The picture outside the window reinforces this feeling: out of the darkness, heaps of mysterious metal frames suddenly appear in the beams of searchlights. The very history of Zenobia is reminiscent of the fate of the Titanic – the 180-meter ferry sank on its maiden voyage.

The colossus looming out of the dusk looks like a whole underwater city. The site is fantastic: as if children’s toys lie at the bottom of huge trucks transported by ferry. They say that the catastrophe occurred due to a malfunction in the ballast system. The ship tipped, and all the cargo shifted to one side.  After two days, the ship sank, and every one of the crew made it to shore safely.

Glass bottom boats have long been a popular attraction. And in Greece, an excursion on such a boat was even included in the mandatory tourist program, combined with a tour of the city of Corfu, and is offered on a par with visiting ancient temples. However, if you wish, you can ride a boat with an underwater view without ballast in the form of land-based sights. It is incredibly convenient if you go on board with children solely to satisfy their curiosity. By the way, this walk is mainly designed for small tourists.

The underwater world in Greece is not as diverse as, for example, in Egypt, so to admire through the glass is mainly the serenity of the azure abyss. You can see signs of life only during a stop when divers descend into the sea to feed the inhabitants of the deep, and the small local lads reluctantly gather in flocks. Divers skillfully organize several stunts with the participation of these living creatures — the fish, as if trained, embody all the artistic ideas of generous people. Further, fur seals appear on the stage. The audience of three to seven is delighted! The pleasure is not expensive: a boat ride and an underwater show.

If you don’t know how to swim, are afraid of scuba diving, suffer from claustrophobia, and therefore are so scared of a submarine, but if you want to see the deep world as you wish, you have a direct road to Mauritius, to the city of Grand Baie. It offers a unique attraction – an underwater walk. They give out a bathyscaphe helmet of the necessary equipment at the start – something resembling a space suit.

A tube is connected to it, through which oxygen enters. The advantage is that the heavy oxygen cylinder does not hang behind your back. The downside is that you have to walk along the bottom on a leash. However, the latter does not bother tourists because such a trifle does not hinder thrills. And the experience is truly unforgettable. Perhaps this is what astronauts experience in space: the limbs become weightless, and the movements are very smooth.

The immersion depth is small – about three meters, but this is enough to feel like you are on another planet. The walk is not very long – the session lasts half an hour. In addition, they give a guide who draws your attention to everything that deserves it.

The Red Sea is one of the main treasures of Egypt. And at local resorts, you can find almost any water-related entertainment. But the main trump card of the Egyptians is diving. For the sake of it, both experienced divers and beginners come here. Still would! Coloured coral reefs, the brightest fish, and formidable marine predators – where else can you find such an abundance? One mask is enough to enjoy this beauty, but more opportunities open up for better-equipped people. For example, a couple of world-famous underwater sights are not far from Sharm – the Dunraven and Thistlegorm ships resting at the bottom. These are places of pilgrimage for divers from all over the world.

The Dunraven was a 19th-century sailing ship with spices, cotton, and timber from India. The Thistlegorm is a warship that sank in 1941. He carried firearms, soldiers’ ammunition, motorcycles, jeeps, trucks, and aircraft parts. All of this may still be seen in the ship’s holds. Of course, such “excursions” are available only to divers of a certain level of training.

Arriving from diving, they describe what they saw in colors, thereby increasing the number of those wishing to join their ranks. And the Egyptians generously provide such an opportunity. Local dive clubs offer any Padi courses (starting at $200). For those who aren’t sure whether or not to get certified, it’s best to do a test dive from a boat (about $50).