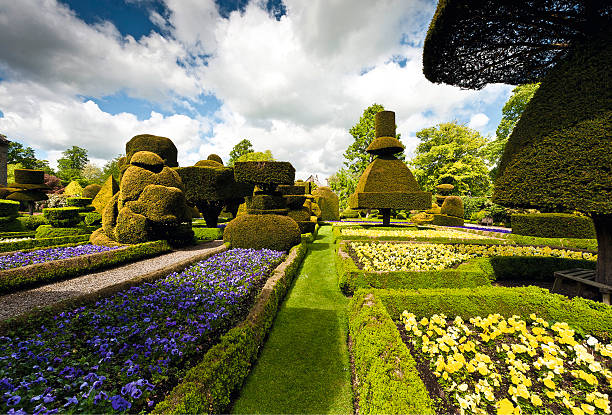 The townspeople, tired of the noise, decide to get some fresh air but do not wish to move too far from civilization, and they go for a walk in the park. After all, the park is such a wonderful place where nature is ennobled, especially for our pleasure.

Sometimes people’s intervention in the surrounding landscape is limited to the creation of romantic linden alleys, lawns and flower beds, and sometimes in their fantasies, a person goes much further, and as a result, fascinating places for walking appear – strange, unusual or funny. We invite you to visit some of these strange and funny parks.

This park appeared in the Renaissance thanks to the inflamed imagination of Duke Francesco Orsini. He lived happily on his estate in Bomarzo with his beloved wife, Giulia Farnese. But one day, when her husband was on a regular military campaign, she died in an accident. In memory of her, the duke created Sacro Bosco – the “Sacred Forest”, which the locals renamed the park of monsters. And there was a reason: strange stone statues were hidden in its gloomy thickets.

The “Maw of the Underworld” alone is worth something – a massive head with a gaping mouth and an inscription from Dante: “Abandon hope, everyone who enters here.” Words spoken inside such an unusual garden pavilion are heard in the far corners of the park.

There is also a tiny leaning tower where people experience rather strange sensations. For a good reason, the duke came up with all these curiosities: after passing through the eerie forest of symbols and having met with their sins, vices and terrible fantasies, visitors finally find themselves in front of the Temple of Love, dedicated to Giulia Farnese. The city of Bomarzo is located 25 km from Viterbo.

The name of the main attraction of the small town of Galveston, in the state of Texas, can be translated as “Dismal Gardens”, although another option is more accurate – “Mood Gardens”. These gardens were planted by the English landscape designer and architect Geoffrey Jellicoe. According to his plan, in Moody Gardens, visitors were to see the entire history of humankind, embodied in various gardens and parks: from ancient and medieval to Japanese and Chinese.

The result is more like an entertainment center than a history guide. There is a 3D cinema, where educational films are usually shown, and three powerful glass pyramids – at least some reminder of ancient civilizations. One of these structures hosts an oceanarium, another a botanical garden with tropical plants and (to enliven the exposition) tropical parrots and monkeys, and the third, called the pyramid of discoveries, hosts various exhibitions of scientific achievements.

The city of Galveston is located 70 km southeast of Houston, on an island in the Gulf of Mexico connected to the mainland by a road bridge.

3.Garden of the Master of the Nets (Wang Shi Yuan), China

The ancient city of Suzhou is famous not only for its many canals and bridges, for which it was nicknamed the Venice of China but also for its beautiful parks. And since the town was small in ancient times, the parks here are also compact. Thus, the famous “Garden of the Master of Nets” occupied less than a hectare, which has not prevented it from delighting designers and ordinary visitors worldwide for almost 900 years. This “front garden” belonged not to a fisherman but an imperial official, and the name Wang Shi Yuan is sometimes translated as “Garden of the Master of Intricacies”.

Maybe because the official liked to keep guests in the net of his hospitality, or perhaps the pavilions, courtyards and galleries create the illusion that the garden is much larger than it seems from the outside. Flower gardens, trees, water lilies on the pond surface, and patterns laid out of pebbles are visible through the carved lattice shutters and round “moon” windows. The pavilions are also not randomly located — for example, the “Moon and Wind Pavilion” is designed to admire the moon’s reflection in a pond on a clear night. Suzhou is located about 100 kilometers west of Shanghai, on the shores of Taihu Lake.

If Chinese gardeners strove for harmony with nature, their European colleagues did not stand on ceremony with heart, at least creating topiary parks. These are parks where the crowns of trees and shrubs are turned into geometric shapes. The French were fond of such tricks, but for some reason, the most famous topiaries are in the USA and Great Britain.

One example is the garden at Levens Hall in the English county of Cumbria. True, the Frenchman Guillaume Beaumont created this miracle at the end of the 17th century. He was a great inventor, and thanks to his efforts, now lions, peacocks, chess pieces, bottles of local ale and even royalty grow in the park (one of the compositions is called “Queen Elizabeth and her ladies-in-waiting”).

An excellent example of the triumph of geometry over botany has been perfectly preserved today because the park has not changed owners for 300 years, and numerous gardeners regularly correct the “hairstyles” of plants today.

The county of Cumbria is located in the north-west of Great Britain, about 250 km from Manchester, and is part of the Lake District National Park.

In this park, located in the Pattaya resort, trees of different generations are collected – not only living, with neatly trimmed crowns but also petrified, which, as the place implies, are already millions of years old. However, ordinary boulders of non-vegetative origin, arranged in bizarre compositions, add variety to the landscape.

Unlike the ancient mossy exhibits, the park itself is pretty young – it was created in the early 90s of the XX century by a Thai businessman and collector of exotic plants with the sonorous surname Phanomwattanakul. A lover of living and dead nature, in addition to fossils, decorated his brainchild with an artificial waterfall and a bonsai garden. And at the local crocodile farm, everyone can admire cute alligators, feed them, or, conversely, try crocodile meat barbecue.

In Vietnam, they also like to entertain foreigners with an acquaintance with crocodiles. For example, alligators are almost the main characters in the popular Suoi Tien amusement park. Tourists feed the living beings, and the sculptures decorate the alleys. However, the matter is not limited to reptiles alone — here. You will meet statues of dragons and other mythical and real beasts. In addition, there is a temple of zodiac signs in the park.

Therefore, according to the Eastern calendar, images of a bull, a rooster and their counterparts are also necessary. And in and around the pagoda, you can see Buddhist saints and characters from Vietnamese folklore. There is also an oceanarium where you can look at the inhabitants of the deep sea. There is also a water park and rides, although you should not expect any miracles from them: the water park is beautiful but more likely for children, and the ground slides and carousels still do not reach the level of Disneyland. In a word, a very informative walk.

Suoi Tien Park is located 19 km from the capital of Vietnam.

Yoro Park in Gifu got its second name, “Inverted World”, for a good reason: although visitors do not have to move upside down, their ideas about the surrounding reality are turned upside down. The entertainment was invented by modern designer Shusaku Arakawa supposedly so that people would stop recklessly trusting their senses, get an incredible experience and an incentive to change their established life. For the sake of this goal, Arakawa played with the space, perspective and size of the objects filling the park so that the poor fellows who got here wholly lost their sense of reality.

There are no straight lines here, but there are areas where you have to move by touch, artificial trees “growing” at great angles to the surface, and paths twisting upwards. To prevent tourists from hurting their foreheads in getting a new experience, they are given protective helmets – a helpful thing because some visitors begin to fall out of the blue by the end of the walk. But no one complains. Moreover, the number of those wishing to take a walk in the “Inverted World” is growing. Gifu City, the capital of Gifu Prefecture, is located 300 km from Tokyo.