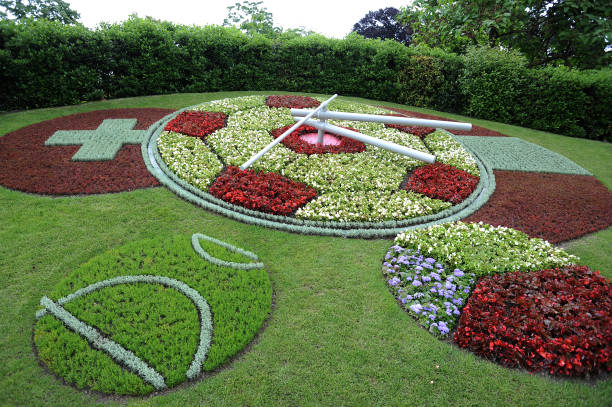 One of the main attractions of Geneva is the flower clock on the Promenade du Lac. Their dial is decorated with more than 6000 plants. And since the flower age is short-lived, the appearance of this city symbol changes several times during the summer. Inside the flower bed is a hidden mechanism that moves the arrows. It owes its precision to the skill of Swiss watchmakers. A couple of centuries ago, the flower clock personified the triumph of botanical genius because technical elements were absent in them. Time could be determined by what flowers bloomed at a particular moment. Compiling such clocks is a real art since flowering depends on many factors: the weather, the time of sunrise and sunset, and geographical location. The selection of a “bouquet” requires many years of observation, but even they do not guarantee the plan’s implementation if, for example, it starts to rain. Over time, living mechanisms began to be replaced by artificial ones, using plants only as decoration.

Where else is there a flower clock: at the Dolmabahce Palace in Istanbul (Turkey), in Christchurch (New Zealand), in the Alexander Park of St. Petersburg (Russia).

A sundial, one of the oldest devices for keeping track of time, is, perhaps, in every country. However, such as in China, there is nowhere else. The Shanghai sundial is a giant steel sculpture 20 meters high. The composition, created by contemporary Chinese artists, is called “Oriental Light” and expresses many philosophical concepts, according to the authors. A great mind and much time are required to understand them, which can be found by looking at an artefact’s dial in sunny weather because art is art, and no one has cancelled the practical meaning. This masterpiece is located in the Pudong area, at the intersection of Century Avenue and Yanggao Road.

Where else is there a sundial: in San Jacinto Square in Caracas (Venezuela), in Cave Creek (a suburb of Phoenix, Arizona, USA), at the Jantar Manta Observatory (Jaipur, India).

The term “water clock” usually refers to a clepsydra, an instrument similar to an hourglass but using liquid instead of sand. It is impossible to know the exact time from it, and you can only measure a specific time interval. However, in America, they decided to fight this state of affairs. In the 18th century, an enthusiast-inventor named Harvey lived here. He designed an accurate water clock – a mechanism with a dial and hands set in motion by the power of water. Harvey’s watch shows the time and the current day, month, and year. True, there was a discrepancy with the latter.

The device was designed at the end of the 18th century and patented in 1798. But the inventor did not count on the long life of his offspring. In any case, the 19th century froze forever on the scoreboard with the designation of years. Since then, a lot of water has flowed under the bridge, and people still go to Stone Mountain Park (Georgia) to look at the engineering miracle.

Where else is there a water clock: in Branson (Missouri, USA) and Pigeon Forge (Tennessee, USA).

There are a considerable number of tower clocks, including very old ones, on Earth. But the Dubai ones are remarkable in that, contrary to all the laws of urban planning, the clock itself first appeared, then the tower and the square grew around it, and not vice versa, as is usually the case. Despite its undignified age by world standards – the Clock Tower was built in 1964 – this is the oldest art object in Dubai. The prehistory of its construction is quite interesting. The clock at the top of the tower is a gift that Sheikh Ahmed of Qatar made to his father-in-law, Sheikh Rashid. Since the present is a little too big for a home collection, the addressee was puzzled for a long time about where to place the precious gift. An architect came to the rescue, designing hotels for the sheikh. He sketched the clock tower.

The owner of the watch liked the idea and brought it to life. The tower was placed at the intersection of highways in such a way that a roundabout appeared around it. It is also curious that the numbers on the watch dial are Arabic but not the same as those known to us. For example, actual Arabic numerals can be seen on the money of Arab countries.

Where else is there a tower clock: on Big Ben in London (Great Britain), on the Torre dell Orologio tower in Venice (Italy), on the Zimmer tower in Lira (Belgium).

The Venetian astronomical clock(St Mark’s Clock) in Piazza San Marco shows the time, the phases of the moon, and the signs of the zodiac. In addition, this gold-plated and blue-enamelled instrument is a true work of art. Once an hour, its front panel reveals a string of wooden figurines narrating the birth of Jesus. Particular attention is drawn to the bronze figurines dressed as shepherds at the very top of the clock tower – the Venetian Moors, named for their brown colour. Every hour they beat the giant bell with sticks, but not at the moment when the minute hand passes the number 12. Everything is much more symbolic. One of the shepherds – the one with the beard – is old, and the other is young. The older man symbolizes the past – he strikes the bell five minutes before the next hour. The young man personifies the future and calls at the sixth minute of the new hour.

Where else is there an astronomical clock: on the Old Town Hall in Prague (Czech Republic), on the Strasbourg Cathedral (France).

Tokyo’s Shiodome district houses one of the most oversized clocks in the world. They are located at the level of the second floor of the building of the Japan Television Network, weigh 28 tons and are equal in height to the whole floor. But it is not their size that attracts tourists here, but their unique design. This watch is based on Hayao Miyazaki’s Howl’s Moving Castle anime. Every hour a huge copper block comes to life: numerous doors and latches begin to move, and cartoon characters emerge from them. In the evenings, when the action unfolds under the pink and blue neon light, it seems as if everything is happening in Disneyland. By the way, the famous director was engaged in the watch’s design.

Where else there are cartoon clocks: in all the Disney lands of the world.

Among the main attractions of Munich is the central square Marienplatz with the neo-Gothic building of the new town hall, built in the late 19th — early 20th century. Its main highlight is a unique watch. The chiming clock, provided by 43 bells, sounds twice daily – at 11 am and 5 pm and from May to October at noon. Under this 15-minute chime, 32 brass figurines appear, and a real puppet show unfolds, representing scenes from the history of Munich. On the clock’s upper tier, Duke Wilhelm V’s wedding is played out. On the lower level, the coopers perform the famous Munich dance Schäfflertanz. According to legend, it arose during the plague of 1517. They say that the coopers then began to dance in the street to raise the spirits of the desperate townspeople. When the epidemic ended, the king granted artisans the right to dance in the streets every seven years.

Where else is there a puppet clock: at the Puppet Theatre. S. Obraztsova in Moscow (Russia), at the Cathedral in Wells (Somerset, Great Britain), at the Zytgloggeturm bell tower in Bern (Switzerland).