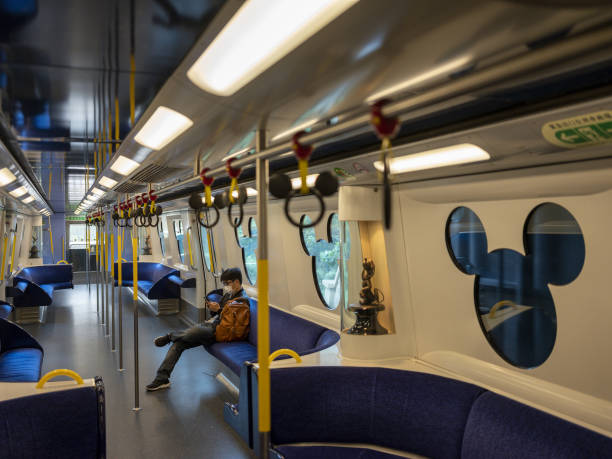 A big city is unthinkable without the subway. It carries passengers to their destinations without holidays and weekends, delays and lunch breaks, and with pharmaceutical precision. When traffic jams paralyze the metropolis, only it saves the citizens, exhausted by the expectation. The subway falls asleep only for a few hours, and the city freezes with it.

This very public mode of transport, like a mirror, reflects how this or that person lives. In eastern countries, the metro is more modern; in western countries, it keeps the history and atmosphere of the capitals, with which it grew and developed. That is why wherever your thirst for travel takes you, you should take a ride on the best subway in the world.

Hong Kong is the only city with a dedicated subway line to the local Disneyland. The trains that run on it are fabulous carriages, setting both children and adults in the right mood: windows, handrails, and other elements are made like Mickey Mouse’s head. At some stations, the transitions are paid – there are turnstiles, passing through which you need to leave your ticket and purchase a new one to get to another line.

At the same time, you can always choose an alternative route that does not require additional payment, although it lengthens the way – when buying a ticket through a machine, the system offers several travel options. By the way, there are shops and free Internet centers in the Hong Kong subway.

The Berlin subway has perhaps the most challenging history among all the world’s subways. In 1961, after the construction of the Berlin Wall, which divided the city into two warring camps, the U-Bahn lines, which previously connected the districts, now began to cross the state border.

And all the branches stretching from West to East Berlin were cut off along the line beyond, except U6 and U8. They made a loop along the eastern part and returned to the western region, so they were not closed, but the trains followed them without stopping at several stations. Curiously, the Berlin U-Bahn trains have special places for cyclists.

A bicycle ticket costs 1.5 euros and is valid for two hours or 4.4 euros daily. And if you enter the subway with a big dog, you will have to buy a child ticket for it.

The Singapore metro: MRT (Mass Rapid Transit), even though it consists of only three lines, is one of the most modern. In 2009, at the annual Metrorail conference held in London, it was recognized as the best in the world as inexpensive, safe, comfortable, and environmentally friendly.

The Singapore Metro has two operating companies: SMRT Corporation, which manages the North-South Line and East-West Line (which received the award), and SBS Transit, which transports passengers on the North-East Line. This line is fully automated – trains run on it without drivers.

The only glamour you can find in the subway of the capital of world fashion is the station entrance. Wrought iron street canopies, designed by the famous architect Hector Guimard, are one of the symbols of the Paris subway. Otherwise, it is modest: many stations are finished with white tiles (it better reflects the light of dim lamps).

Because houses in the historical center of the city, as a rule, have basements, the first metro lines were built here strictly under the roadway, and since the old streets are very narrow, the platforms were placed as needed: somewhere they are crooked, where – they are far away from each other.

A night tour of the Paris metro is available for those interested in this fusion of history and modernity. During this tour, visitors ride a train from the 1930s. Carry on the intricacies of tunnels and long-closed stations. And the Metro de Paris has very short hauls.

The Kuala Lumpur Metro consists of three lines: the Kelana Jaya Line, the Ampang Line, and the KL Monorail. All of them are above ground. The most impressive thing about the Malaysian subway is its novelty. Trains are like toys. The brightly colored cars creep along the rails: being inside, you hardly hear or feel the movement, thanks to which you can admire the views of the city without being distracted by anything.

The Brussels metro is incorporated into the city’s unified transportation system, allowing you to ride trams, buses, and the metro simultaneously. A ticket for one trip is valid for an hour, enough to cross the city from one end to the other, changing the means of transport several times.

A curious feature of the Brussels metro is that the stations are decorated with paintings and sculptures by contemporary Belgian artists so that when you go down the subway, you feel like you are in a museum. And since the subway is not very busy here, one even manages to enjoy the contemplation of these creations.

The Tokyo subway has a rather complicated fare system: the cost of a trip is calculated based on how many kilometers a passenger traveled. Moreover, even if you buy a cheap ticket to the nearest station with the expectation of getting to a distant one, you still have to pay in full at the end of the journey – turnstiles are installed both at the entrance and the exit of the subway. There are also machines where you can make a surcharge.