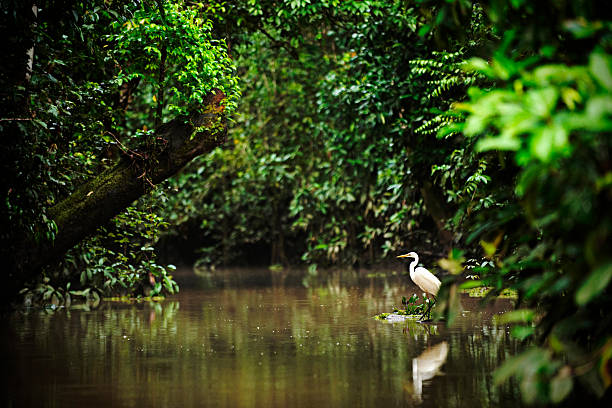 In recent years, eco-tourism is gaining more and more adherents worldwide. Today, untouched nature becomes the best attraction for tourists when we identify the smell of hot asphalt much faster than a sun-warmed meadow and take children to the zoo to show the horse.

People go to the ends of the world to wander among the trees, drink water from a stream, knead clay in the company of illiterate residents of some lost village, and, at least for a few days, feel like a part of the miraculous world. And where to look for pristine beauty, if not in the forests.

Here are 7 best eco-tourism destinations in the world.

The jungle of Borneo is one of the most dangerous places on the planet. Nature here is not just wild but aggressive. If you wander through the forest, be prepared that the walk will be extreme. You will have to wade through bushes and vines covered with huge thorns and thorns the size of a carving knife, try not to become a victim of poisonous snakes, and languish from the attacks of vicious midges, which, in addition to drinking blood, will try to put larvae under your skin. And all this in 40-degree heat and 85 percent humidity.

It is home to various exotic animals and birds, including fish that can jump ashore and lizards that glide from trees. And the trees themselves are impressive – they grow on average up to 50-60 meters, so the sun’s rays, even if they manage to penetrate through the crowns, never reach the ground. Those places still have suspension bridges spanning the trunks of trees – a remarkable and frightening “attraction” for those with strong nerves. In addition, wild tribes still live in the dense forests of Borneo; in the recent past collected, human skulls and those vast flowers that smell bad grown. On this island, you can feel like a real pioneer.

The main asset of Kenya is its national parks and reserves. More than fifty reserves occupy about 8% of the country’s territory. In these protected areas, you can observe the rarest species of animals and birds in natural conditions. Here, tourists can stay in comfortable bungalows and participate in regular safaris.

One of the largest parks in Africa, Tsavo, opened in 1948. For the most part, it is a treeless savannah and woodlands, but in places, on moist lands, ancient baobabs, umbrella-shaped trees, and acacias grow, shrouded in white and white during flowering—pink clouds.

The main attractions of Tsavo are the Ngulia Canyon, the Yatta Plateau (a 300-kilometer frozen lava flow), and the Mzima Spring, home to hippos and crocodiles, Underwater cameras are available for viewing this phenomenon. The fauna of Tsavo is very diverse: lions and cheetahs, antelopes and buffaloes, zebras and giraffes, jackals and hyenas.

The pride of the park is the population of elephants. Here they are covered with a layer of reddish dust – this is precisely the shade of the earth in reserve – and they look entirely surreal. Who has not seen a pink elephant – you are here. The park also offers a beautiful view of Mount Kilimanjaro.

For most tourists, sunny Florida is associated with the Walt Disney amusement park, thanks to which the central part of the state does not lack guests. However, animated cartoon characters are far from all worth seeing here. Just south of Miami is the Everglades National Park, home to various species of waterfowl, manatees, alligators, cougars, and more, a unique wilderness island in the hardwood jungle.

The Everglades subtropical park occupies a vast territory and is the largest freshwater swamp in the world. Dense, sometimes impenetrable thickets predominate here. Deciduous trees, several species of orchids, and ferns grow on separate islets; on the ocean shore, mangroves with thick roots intertwined in the air rise above the water. Additionally, there are temperate oak and ash trees within the park, as well as yuccas and cactus. It is possible to observe many bird nests in local forests, including rare birds such as the tree stork, red heron, and bald eagle.

Thanks to Hollywood artists, most of our fellow citizens associate the forests of the Amazon with the search for adventure. Tropical thickets, rare plants and animals, the mighty Amazon River, and legends about Indian settlements lost in the jungle attract those looking for unexplored routes. A study reveals that only 30% of the Amazonian forest’s flora has been studied.

Many species of fern and wild lemon trees grow here, as well as cotton trees that reach 60 meters in height and 10 meters in diameter. These forests are home to almost 2,000 species of birds (including the toucan, parrot, macaw, and hummingbird) and 250 species of mammals (including the jaguar, tapir, spider monkey, sloth, and armadillo).

Piranhas and crocodiles live in the waters of the river itself. Now that Amazon is hot and humid, there are many insects, so even a program designed for unprepared tourists is not suitable for everyone.

The forest, stretching for tens of kilometers, is what strikes a person who first came to Belovezhskaya Pushcha. Giant spruces and pines, centuries-old oaks and ash trees – nature are so familiar and close to us. It is pleasant to walk in Belovezhskaya Pushcha – no poisonous plants with sharp thorns, no malarial mosquitoes, no lurking snakes, only the quiet rustle of leaves and pleasing landscapes to the eye.

Every year, hundreds of thousands of tourists visit this region. Today, a museum of nature operates on the territory of Belovezhskaya Pushcha, and experienced guides conduct excursions through the forest. For those who want to take a walk on their own, ecological paths have been laid that allows you to get to know nature better and even see forest animals: deer, elk, roe deer, and wild boars.

But the main pride of the park is the bison. Belovezhskaya Pushcha is one of the few places in the world where this giant, reaching two meters in height and three and a half in length, can be seen in its natural habitat.

Three hundred kilometers from the city of New Delhi, in the hilly Himalayan foothills of Sivalik, is the Jim Corbett National Park, which is famous for its unforgettable landscapes. It is named after a legendary person in India. Jim Corbett was famous for many talents, but his ability to perfectly reproduce animal sounds brought him national fame.

They say that when man-eating tigers appeared in the vicinity of the villages, the inhabitants called for Corbett’s help. He, looking into the predator’s eyes and imitating his growl, drove the beast into a corner. Jim Corbett Park is part of a vanishing world of untouched nature.

It features savannahs, mixed broad-leaved forests, and jungles, which are home to hundreds of species of wild animals and birds. Here you can see sloth bears, jackals, martens, deer, and porcupines. Reptiles include pythons, cobras, and a rare animal – the gharial. This crocodile, reaching six and a half meters, is the closest relative of dinosaurs.

It is listed in the Red Book and found only in Indochina and Hindustan rivers. The park is also famous for the variety of cat species. Among them are leopards, reed cats, and fishing cats. A point of special pride is the growing population of the royal Bengal tigers, the increase in the population of which is one of the main tasks of the reserve. It is open for visits from February to May.

There is much everything in it – you know. Moreover, our “everything” is no more trivial than “everything” foreign, and as far as wildlife is concerned, this is especially true. There are places to get lost, what to pick up along the way, and by whom to be eaten in the forest thicket. Who does not believe – welcome to the taiga, somewhere far beyond the Ural Range, the Altai, the Baikal region, and the Far East.

One of the beautiful places is the Baikal-Lensky State Nature Reserve in the Irkutsk Region. Here you can see such rare birds as the black stork, hook-nosed scoter, gray crane, shelduck, and white-tailed eagle. The reserve is famous for the high population of the brown bear, which is even considered a kind of symbol of this region.

Bears usually leave their dens in the second half of April. And around June, when bullheads lay their eggs, sometimes six or seven animals turn boulders with a roar on the shore. Finding moose in the Lena section of the reserve is most common. They feed on aquatic plants and are excellent swimmers.

There are also wolves here. And most importantly, these places are simply fabulous: over there, a stump could easily command the bear, Masha, who loves pies, and from under the spreading branches of that tree over there, the goblin will jump out.