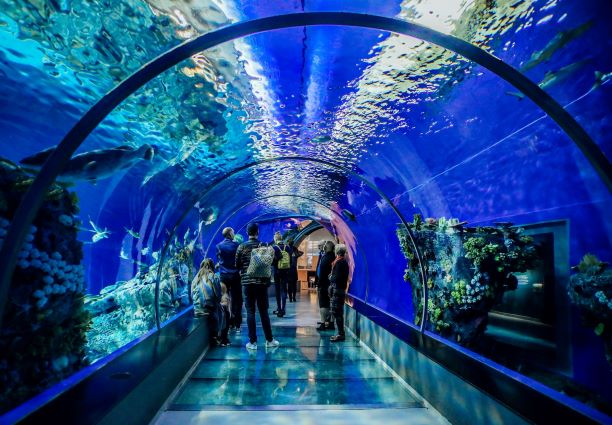 Opened in 2005, the Oceanarium in Atlanta is considered the largest on Earth. More than 100,000 animals participate in his daily underwater show Behind the Glass, but the main stars are the whale sharks that inhabit the Journey with the Giants gallery. Other local curiosities are an eight-meter manta ray and white whales.

The aquarium on the island of Okinawa claims to be the second largest in the world. It holds 7.5 million liters of water. Its primary purpose is to illustrate the underwater life of the East China Sea surrounding the island. While admiring tropical fish and giant stingrays, visitors go down the three-story observation gallery through the coral reefs and warm currents to the “bottom”.

The largest in Europe, the Portuguese Oceanarium competes with its Japanese counterpart for the second position in the world rankings. True, the volume of the central reservoir is only 5 million liters of water, but other sections also demonstrate the underwater world of the Pacific and Atlantic oceans, the Arctic, and the Antarctic. By the way, visitors can, if they wish, celebrate their birthday here or spend the night on the “bottom of the sea”.

This aquarium is a relatively new attraction in Valencia (opened in 2002). It is part of the huge City of Art and Science complex. More than 45,000 fish and aquatic mammals are splashing behind the transparent windows of Oceanographic. In addition, sea birds are also represented here, and there is an open dolphinarium in front of the building.

There are two aquariums in Bangkok, but the one in the Siam Paragon shopping center is recognized as one of the largest in Asia. More than 30 thousand fish and marine reptiles live in it, sorted into seven zones. It is noteworthy that in the Thai underwater kingdom, you can walk along the aquariums and swim in them on a boat with a transparent bottom.

Stralsund’s “underwater” museum unites 39 huge aquariums, which 7,000 marine animals inhabit. However, not only live exhibits are presented here, but also a luxurious collection of stuffed animals. For example, life-size models of whales, including a giant blue whale, which would not fit in any aquarium alive, are fixed in a separate room under the ceiling.

The Italian Aquarium is also densely populated: about 7,000 underwater creatures are housed on its three floors. For a change, the exposition was supplemented with tropical birds. In addition, there is a penguin circus and an outdoor pool with large stingrays, which anyone can stroke – a rather original entertainment.

This landmark of Kuala Lumpur is located in the basement of the Convention Center KL, not far from the local twin towers. More than 5,000 exhibits are splashing behind the glass walls of the Oceanarium. Among them are not only the inhabitants of the seas and oceans but also living creatures swimming in the flooded forests of the Amazon. Visitors don’t have to stomp “to the bottom” themselves: a treadmill takes them through a 90-meter underwater tunnel.

The Oceanarium, opened in the resort town of Antibes on the Cote d’Azur, is one of the European leaders. Flocks of fishes, dolphins, killer whales and turtles settled in its aquariums, pools, and lagoons. Guests who want to prove that they swim as well as sea creatures can have fun in the nearby water park.

More than 4.5 thousand fish and other inhabitants of the deep sea have been collected in the aquarium in St. Petersburg. This company settled from the “Tropical Forest” to the “Rocky Coast”. There are 32 reservoirs in total, but the most interesting one is the main aquarium with the only underwater tunnel in Russia, through the transparent walls of which you can watch the show of divers with sharks.